With the number of new car sales in China every year being higher than the number of people in Australia, it is easy to assume that Aussie car market and car sale statistics are unimportant. However, if you take a look at the data per-capita, it tells a different story.

Despite a significant decline in car sales in recent years, Aussies are up there with the biggest car buyers in the world (per person, at least).

How Many Cars are Sold in Australia Each Year?

In 2021, Australian car sales are predicted to see growth and once again reach the 1m mark. So far, this recovery is already underway - in continuing with a trend of high sales in the final months of 2020, January 2021 saw new car sales of 79,666 - the highest January sales since 2012.

Looking at the Australian vehicle market and new car sales more generally, the new car market has yet to recover from declining sales - despite positive signs in January 2021, car dealer reports of stock shortages due to rising demand alongside production restrictions are just one example of the difficulties faced within the car market.

Prior to the COVID-19 pandemic, reports on the topic of vehicle buying intentions demonstrated that the number of Australian people planning to buy a new vehicle in the next four years had seen a decrease of 19.1% (attributed to a slowing house market and economy, as well as tightened money lending) . While restrictions and COVID-19 limitations have further impacted these intentions, experts predict that the car industry will see new car sales of over 1 million in 2021, as restrictions are reduced and the economy begins to recover.

While used car data is more difficult to track (thanks to a lack of reporting and the ability to track used car sales), there are plenty of interesting metrics regarding used car information. For example, ABS data collected in early 2018 found that the average age of an Australian car is 10.1 years old - despite such high new car sales, it is evident that used cars are a significant part of the Australian vehicle market.

When it comes to electric and hybrid vehicles, Australian data is once again limited, however it is clear that their popularity is on the rise.

Currently, the number of electric and hybrid vehicles being sold in Australia is fairly low - these figures are difficult to estimate, particularly as Tesla does not publish sales data, which makes the estimation of EV sales difficult. With this being said, Tesla is experiencing an explosion in popularity, and a number of competitors such as Mercedes-Benz and Audi have released their own electric vehicles .

Ultimately, whilst hybrid sales have previously been driving EV sales, the popularity of pure electric vehicles is increasing. In Australia, the best car brands by sales have been fairly consistent - throughout the past year, the results on unit sales by brand in 2020 were as follows:

Looking at the sales data surrounding passenger car sales by type in Australia, early 2020 data indicates that Australians heavily favour SUVs - four of the top 10 vehicle types, as of the start of 2020, were SUV models. Looking at the overall 2019 data by segment, SUV sales comprised over 50% of total vehicle sales (with the remainder being light commercial and non-SUV passenger cars).

A commercial vehicle can be defined as any vehicle used for paying passengers, transporting goods, or undertaking business activities. As we continue through 2021, a number of trends are becoming clear regarding commercial cars and automobiles. Within this time period, NSW saw over one third of all car sales in Australia - this is disproportionately high when compared to the NSW population, indicating that NSW owns more cars per person than other state.

Looking at passenger cars sold by month, car industry data demonstrates significantly lower levels of demand in the earlier months of the year - this seasonality can be attributed to a number of reasons - in particular, a general post Christmas and holiday period slump.

Here are the 2017 figures surrounding vehicle sales on a monthly basis in Australia.

When it comes to Australia's car purchasing tendencies in comparison to the rest of the world, Aussies have some of the highest rates of cars per person. Looking at 2018 data, Australia has population of around 25.18 million people, and 19.2 million registered vehicles. This translates to a per capita metric of 776 vehicles per 1000 people. As of 2020, this number has increased to 789 vehicles per 1000 people.

An interesting comparison to make here is in regard to China - whilst they lead a number of vehicle statistics with 372m motor vehicles as of January 2021 (the highest in the world), they have only 200 motor vehicles per 1000 people.

Australian Electric Car Sales in Comparison to the US 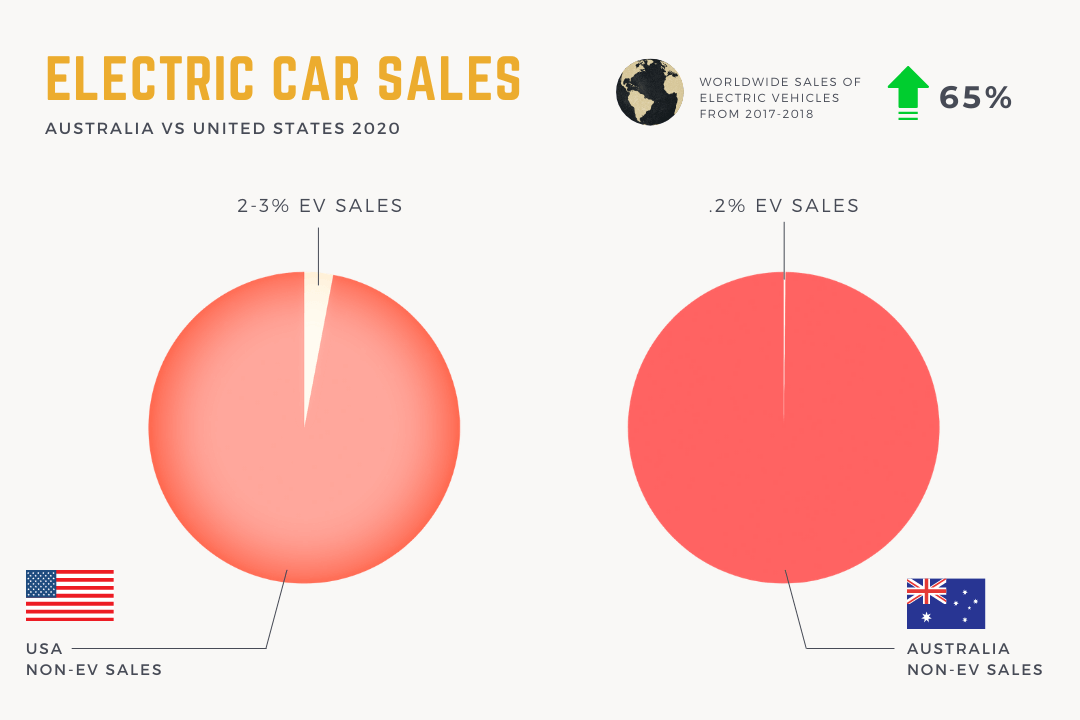 When it comes to sales figures within the EV (Electric Vehicle) industry in Australia in comparison to EV sales within the US, there are a number of notable trends.

Evidently, whilst the US electric vehicle market is more developed in comparison to the AU market, it is clear that plug-in vehicles continue to be overshadowed by traditional cars from a sales point of view.

What is the #1 selling car?

How Many Cars Sold Australia 2019?

In Australia, there were 1.06 million new cars sold throughout 2019.

How Many Cars Have Been Sold in 2019 Worldwide?